Your personal support in Germany 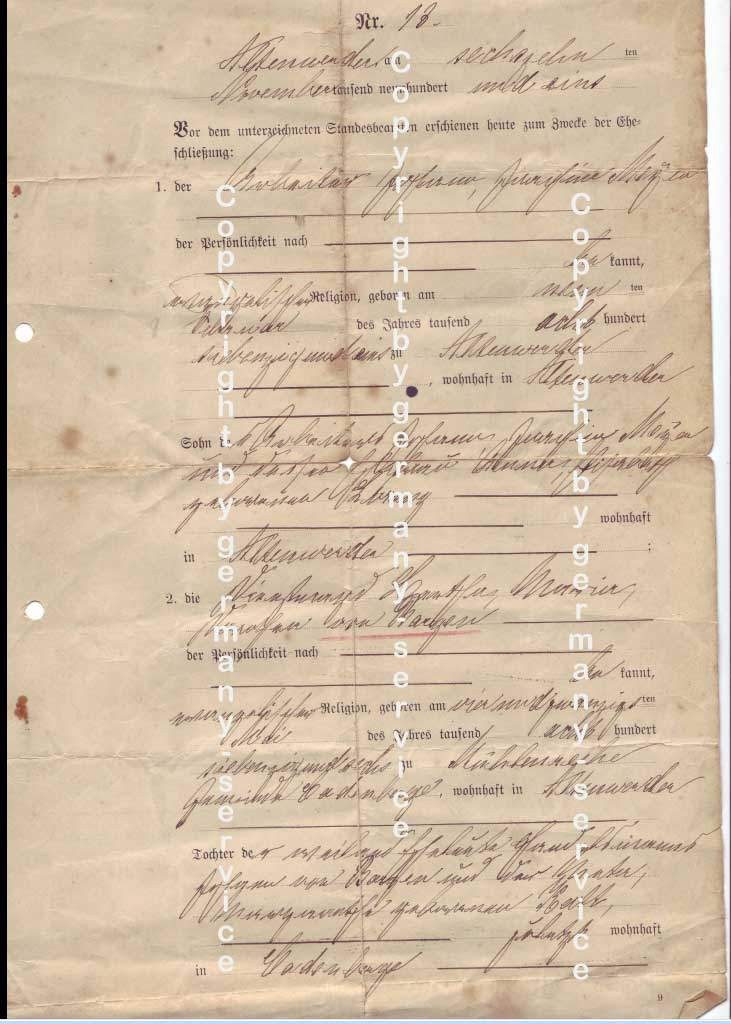 From the church to the state

This policy was reflecting the fact that a unified state as we know it in contemporary Germany did not exist in these days. Prior to 1871, Germany consisted of several countries, dioceses and other independent regions with sometimes heavily contested borders.

With that kind of instability, it was almost impossible to conduct any kind of uniform official business. Also, church influence was considerably stronger at that time.

Marriage ceremonies were exclusively performed by priests, and thus it was straightforward to register births, marriages and deaths at the church, too.

Relatively late, at the end of the 18th century, German churches surrendered some of their power to the state. With civil registries first established in France, these institutions were introduced to Germany in the course of the French occupation of German Rhineland in the 1790s.

Given their origin, it is not surprising that the guidelines for civil registration were at first not based on German code, but on French legislation. The Code Civil – the French equivalent of the German Civil Code – clearly defined structure and functions of a civil registry.

Only on 01-01-1876, an Imperial Act was adopted that replaced the Code Civil as a unified basis for civil registration in the entire German territory. By then, the German state was registering all births, deaths and marriages.

However, in the course of the years there were frequent changes in legislation due to different government agendas. Some of these were amendments of civil registration, too.

Still, the three main tasks of a civil registry remained mostly untouched: keeping the registers of births, marriages and deaths. Thus, a newborn baby has her first contact with the registry shortly after birth. Parents, doctors, midwife or hospital report the birth, it is registered and a birth certificate is issued.

Now, that person is officially born. In the case of a person’s demise, the procedure is quite similar. When the death certificate, completed by a doctor, is turned in, the death is registered and a death record is given out.

Starting 01-01-2009, another change in the regulations for certificates of civil status took hold. Birth certificates older than 110 years are now handed over to the state archive and only authenticated copies of these documents are released.

We communicate with the German civil registries on your behalf and reliably obtain the birth, marriage and death records you require for genealogy studies or other personal reasons.

Any cookies that may not be particularly necessary for the website to function and is used specifically to collect user personal data via analytics, ads, other embedded contents are termed as non-necessary cookies. It is mandatory to procure user consent prior to running these cookies on your website.

Analytical cookies are used to understand how visitors interact with the website. These cookies help provide information on metrics the number of visitors, bounce rate, traffic source, etc.

Performance cookies are used to understand and analyze the key performance indexes of the website which helps in delivering a better user experience for the visitors.